APPLY FOR COACHING
How Kitrian Was Able To Transition
Out of Retail and Get 4 Job Offers
(...including  a 100% remote role!)

Want Results Like These? Let's See
If It's A Fit To Work Together!

BOOK YOUR FREE STRATEGY SESSION Speak with a Pharmacy Hiring Expert
Meagher on her own for 2 years...

"...I applied for positions posted online over the last couple of years but never heard anything after applying."
Kitrian spent 2 years of her life casually looking around and applying sporadically, but she wasn't hearing back. She grew frustrated and felt like she was just sending her application into a 'virtual void.'
She wondered if she wasn't qualified for the jobs to which she was applying? Or she considered that something was wrong with her resume.
Either way, her confidence in successfully transitioning outside of retail pharmacy was starting to dim.
She realized she wasn’t going to be able to do this on her own.
Knowing that she wanted to pivot and change career paths was a great start, but true clarity about what she wanted to do with her career long-term was missing.
In her first coaching session, Kitrian was able to identify what she was passionate about, and her coach was able to help her identify the roles for which she was already qualified.
Once she had a destination in mind, everything else fell quickly into place.
It turned out her resume did need quite a bit of work since it didn't do its job of selling her experience, especially since she was interested in non-traditional roles such as MTM, Work-From-Home, and PBMs.
Right away, Kitrian saw instant results and was able to get not 1, but 3 job offers—all in non-retail pharmacist roles.
Kitrian also had to shift the way that she was searching for jobs. Instead of just hunting and applying on job boards like Indeed and GlassDoor (like EVERYONE else), she needed to be more strategic.
Most of these types of jobs aren't found there, and if they are posted online, it's usually too late. You can count on competing against hundreds of qualified candidates and there is often already an internal front-runner in consideration.
Instead, Kitrian’s coach showed her how to network the correct way—how to identify the hiring target managers and how to get internally referred. Her coach made her aware of the “golden ticket,” in other words.
By clarifying what she wanted and by following a proven formula, she finally started getting responses to her applications—and better yet, landing interviews.
The thing is, Kitrian really followed the process laid out.
Admittedly, the first few weeks were challenging since she didn't get any instant interviews. She was able to identify the pharmacies that she was interested in and locate the hiring managers, but when it came to getting an actual interview, she received the typical response:
“Thank you for your resume, let me get back to you...”
At first, this was frustrating since she had followed the coaching instructions yet still didn’t land any interviews. However, her coach reminded her to have patience and to keep adhering to the process.


Within days the breakthroughs happened.
She got an invite for an interview—her first interview in 2 years!
Then, another interview invitation, then another...
She was thrilled, and more than ready to take on these interviews.
Now she had a coach and a team in her corner and was able to perform a mock interview. Kitrian received feedback that turned her answers from okay or good to outstanding.
Kitrian received 4 JOB OFFERS and accepted her
Dream Job as a MTM Pharmacist (100% remote)!
Today Kitrian is loving her career and enjoying the new path that she has forged as an MTM Pharmacist and enjoying the flexibility and career growth that she is experiencing. 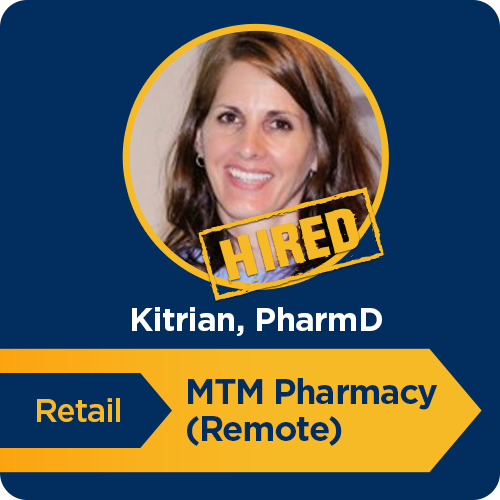 Want the Job You Deserve?
Schedule a career consultation with our team to see if we can help you get “unstuck” and land the job you really want.
YOU DESERVE THIS!
Whatever the outcome, this will definitely be worth 15 minutes of your time 👇
BOOK YOUR FREE STRATEGY SESSION Speak with a Pharmacy Hiring Expert