How Alexander FINALLY Broke Into Industry
(...see how he got 3 amazing Medical Writing offers!)

Want Results Like This? Let's See
If It's A Fit To Work Together!

BOOK YOUR FREE STRATEGY SESSION Speak with a Pharmacy Hiring Expert
Alexander knew there was MORE for him...
After 7 years at CVS, Alexander was ready for a change.

He didn’t hate retail, but he felt like he wasn't continuing to grow in his career and he was ready for a new, more fulfulling challenge.
He enjoyed writing, and had learned about opportunities to work in industry as a Medical Writer.

He Wanted To Be An Industry Medical Writer

Soon he found that it wasn't going to be easy to make this career pivot.

He would search online and apply but he grew frusterated, since he was "...not getting any responses back and only receiving rejections."

He knew he needed help so he joined a coaching program that 'promised' to help him get the results he wanted. But he found that although he enjoyed his conversations with his coach; besides insightful conversations he wasn't getting the tactical, step-by-step instructions nor resources he really needed to be successful.

After following the advice he was getting he still felt stuck, he felt like he "...was spinning his wheels without getting any real results."

Growing disheartened, he saw a post on LinkedIn from Pharmacy Career Coach featuring a free webinar called "How To Escape Retail Pharmacy" and realized that his current strategy was limited...

After a Career Strategy Session with PCC, it was uncovered that in addition to revamping his overall strategy and approach, that his resume, cover letter, and in particular his networking needed improvement and tailored for medical writing roles and he was advised to join Diamond Coaching.
Alex joined and was matched with an Industry Coaching Specialist who is an industry leader with first hand experience in hiring Medical Writers, so he was getting feedback and direction from an actual hiring manager.

“My coach, was very, very results-based and she broke everything down for me. And let me know, hey this is what you're looking to do. This is your goal. And these are the steps of how we're going to get there. And she didn't hold back at all!"

Even with an excellent resume, cover letter, and strategy - Alex lacked direct experience so his coach and networking that he received in Diamond Coaching were critical.
The networking team, grew his network by almost 400 highly targeted industry/medical writing-specific connections and geneated over 20 different job leads which allowed him to tap into the hidden job market and yield amazing results.

This led to not only 1, not 2… but 3 job offers but the time we had the pleasure of interviewing him about his experience.
If you are a pharmacist looking to make a change in your career, and you want to be a success story just like Alex then here’s your chance to set up a FREE consultation with the team here at Pharmacy Career Coach. We look forward to connecting with you soon.

Alex received and accepted a full-time, 100% remote, Industry Medical Writing role with NO WEEKENDS and is absolutely loving it!

If Alex's results are what you want for yourself, we’d like to offer you a 15-Minute Discovery Session with one of our Pharmacy Hiring Experts to determine if we can help you as well. 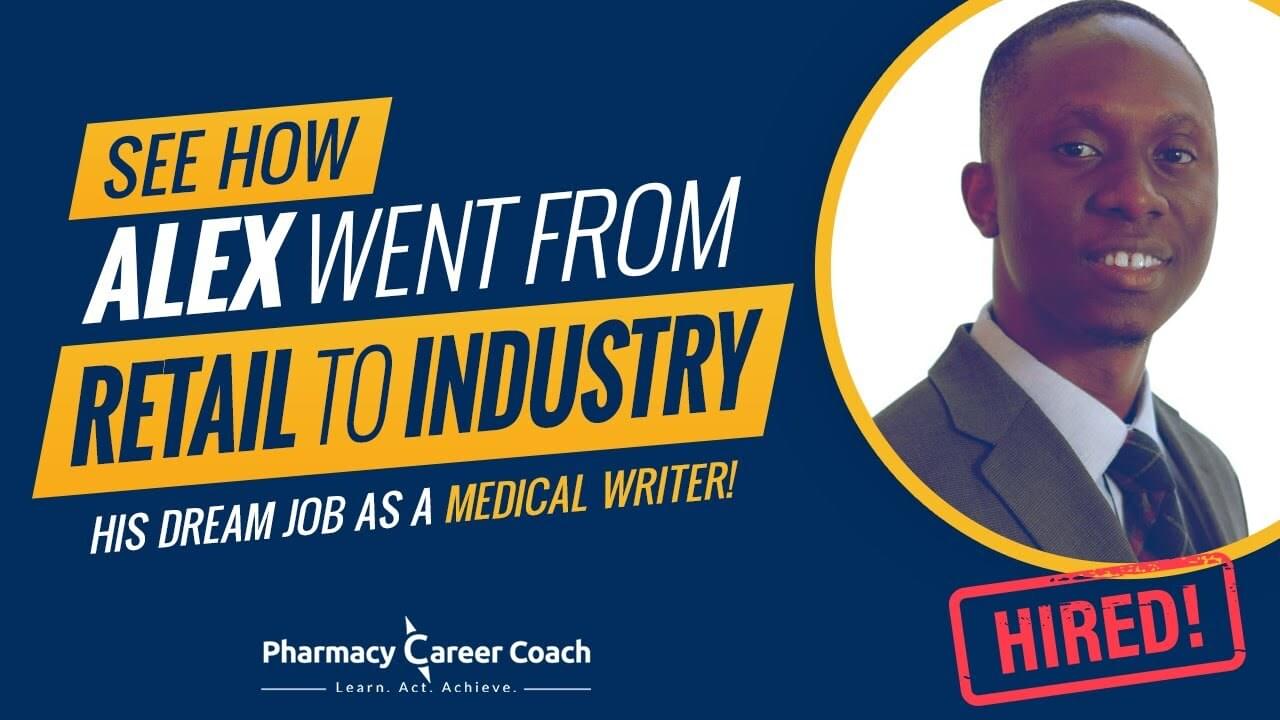 Want the Job You Deserve?
Schedule a career consultation with our team to see if we can help you get “unstuck” and land the job you really want.

YOU DESERVE THIS!
Whatever the outcome, this will definitely be worth 15 minutes of your time 👇
BOOK YOUR FREE STRATEGY SESSION Speak with a Pharmacy Hiring Expert